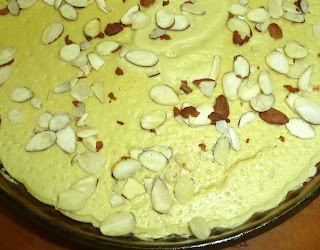 One of my favorite vegan cookbook authors is Jo Stepaniak. If you haven't already checked out her multiple cookbooks, or her website, "Grassroots Veganism", I urge you to do so today! One of my favorite recipes from her "Vegan Vittles" cookbook is Lemon Teasecake, developed by acclaimed vegan chef Francis Janes, former owner of Ambrosia, a vegan restaurant in . I was pleasantly surprised to find a slightly different version of this same dessert here, in this case "Lemon-Lime Teasecake" (page 456). The most amazing thing about this "cheesecake", and what nobody would likely ever guess, is that the main ingredient is cooked millet! Cooked millet has similar properties to cooked polenta, in that it firms up quite nicely after cooling down. In this recipe, the cooked millet is processed in a high speed blender with cashews, lemon and lime juices, agave nectar, vanilla and lemon extract. This mixture is poured into a nutty crust, and allowed to chill for several hours before serving. Be prepared for the most pleasant surprise of your life when you take your first bite, you will be astounded! I like to add a spoonful of cherry pie filling to each slice for a special treat, but you could also just use the slivered almonds as a garnish as suggested in the recipe. 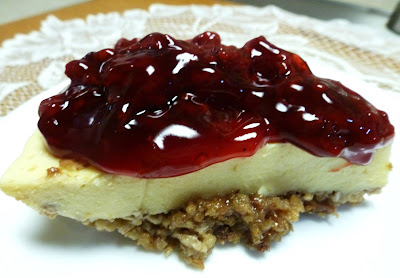 My Notes:
1. Because the crust recipe provided here calls for ¼ cup of canola oil, and I couldn't think of anyway around this, I opted to use another crust recipe I have that is nut based, but without any added oil.
2. In both versions of this recipe the cooking directions call for cooking the millet for 50 minutes. I have never had to cook it this long. Start checking it after 30 minutes. Millet will really stick to your pot if you cook it for too long, or run out of cooking liquid.
3. The filling in this version of the recipe makes about two cups more than would fit in the crust. I poured the extra into a bowl, chilled it, and served it sans crust, like a lemon pudding.

"Keeping it McDougall Friendly" checklist:
ü  Make or buy an oil free crust. Especially good is a graham cracker style crust if you can find or make an oil free version.
Posted by Becky at 9:33 AM