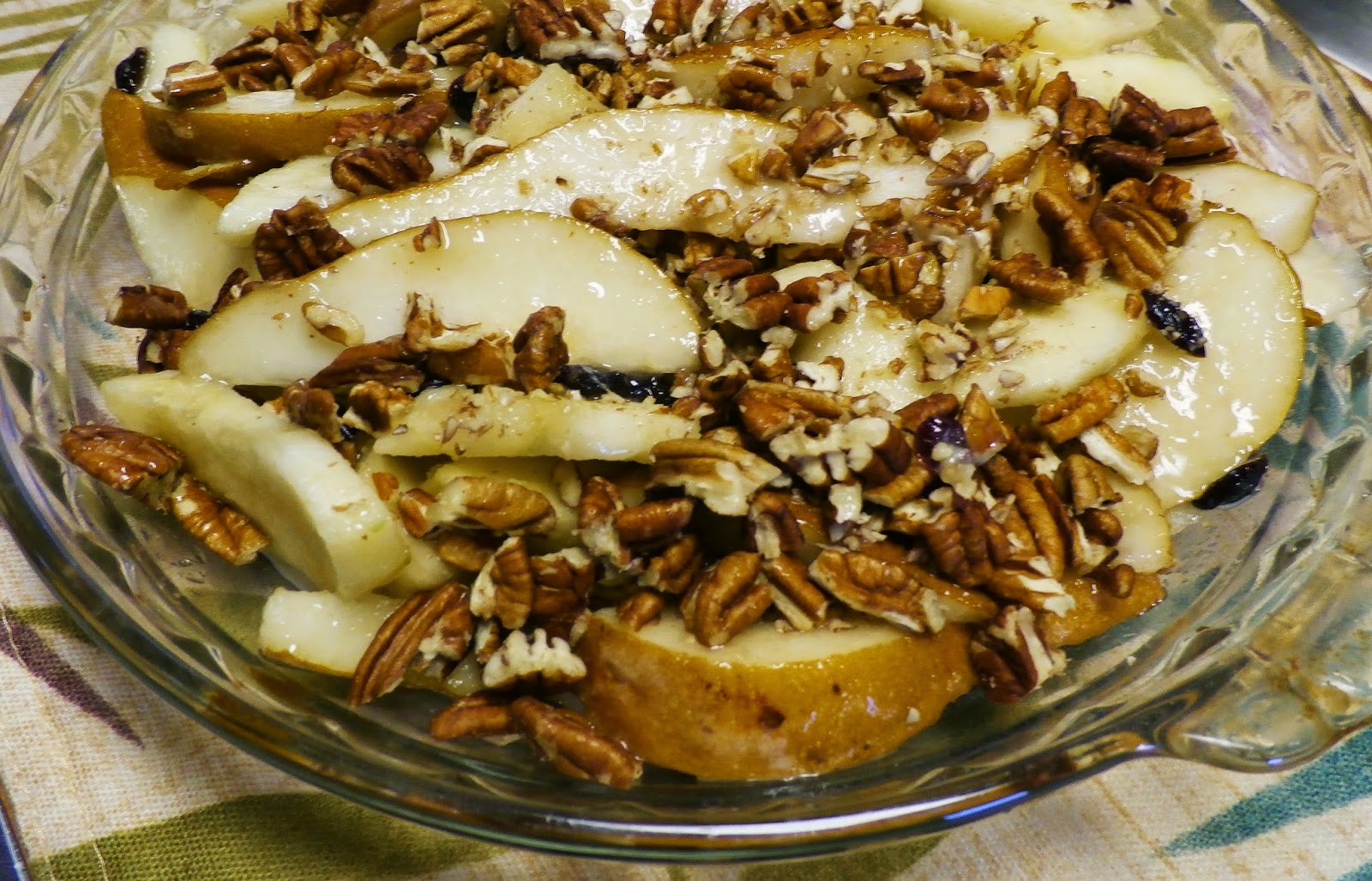 Including dessert in a healthy low-fat diet can be a challenge, but if you look for those that are mostly fruit, you can find plenty of options. "Pear Gratin with Cranberries & Pecans" (page 491) is a fairly healthy choice, especially if you leave out the margarine (as I did), because all it really amounts to is fresh fruit sprinkled with nuts. I say "fairly healthy" because there is a significant amount of nuts in this recipe, which are high in fat. Sliced pears are tossed with dried cranberries, sugar, ginger, and cornstarch, arranged in a gratin dish (I used a pie plate since I don't have a gratin dish), drizzled with a splash of soymilk, topped with chopped pecans, and baked in a hot oven until the fruit is soft. This was a delightful dessert, although the cornstarch didn't seem to thicken up the juices much. In retrospect, I think I could have left out the ¼ cup soymilk without detracting from the overall enjoyment (and maybe the dessert would have thickened up some as well). The recipe calls for dotting the top of the gratin with ¼ cup margarine prior to baking, but I left this out completely, and didn't miss it at all. If you are really feeling decadent, the recipe suggests serving this warm topped with a scoop of vegan vanilla ice cream. (Of course, this would cancel out those benefits of a fruit-only, low-fat dessert!) 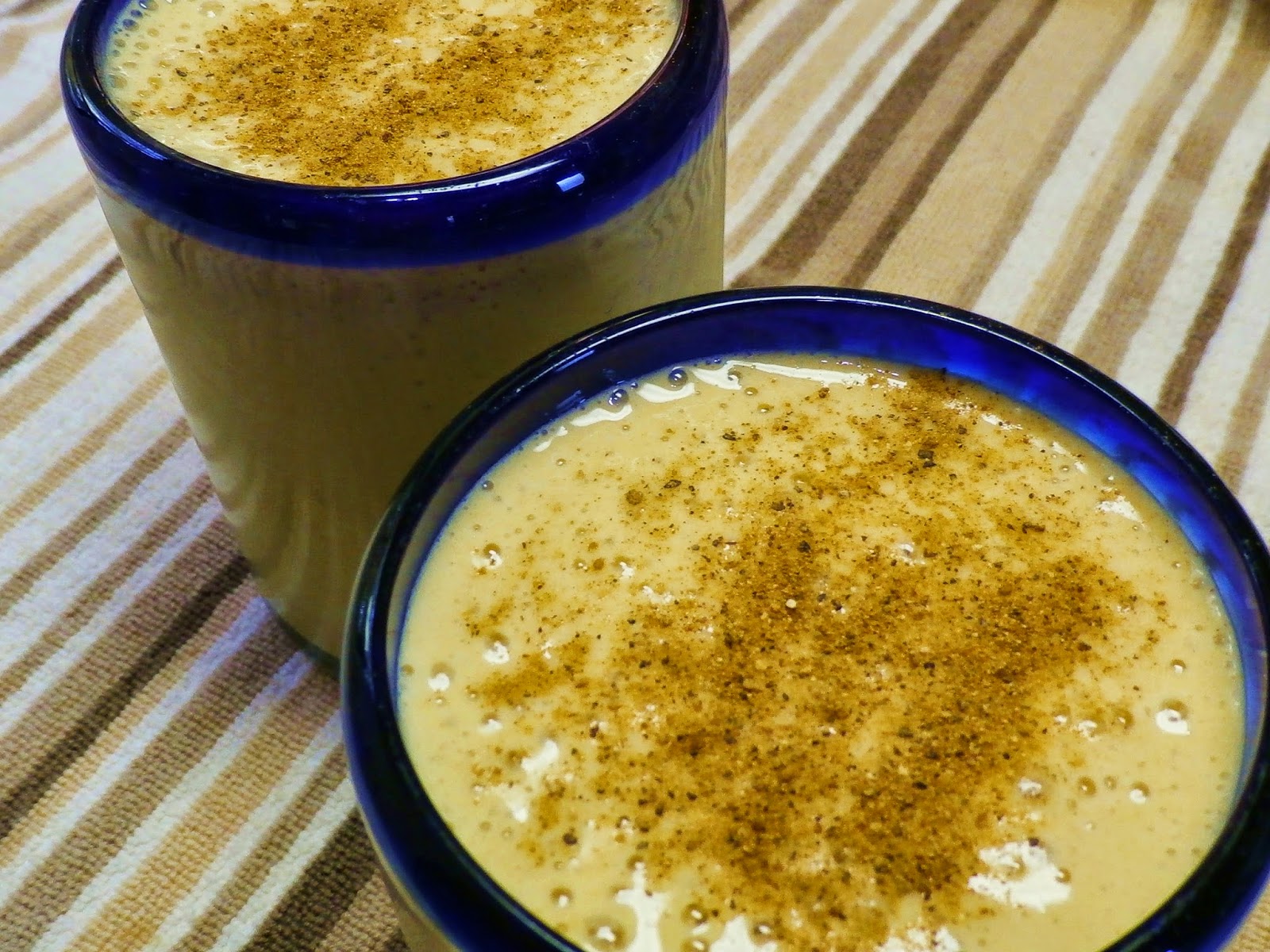 I like smoothies any time, but the "Smoothies in Winter" (page 530), which uses pumpkin, is especially seasonal this time of year. A mixture of puréed pumpkin (fresh, or from canned), frozen banana, pure maple syrup for added sweetness, soymilk, vanilla extract and spices, it is very reminiscent of pumpkin pie. (If you happen to have any plain vegan yogurt on hand, substitute half of the milk with the yogurt for a treat that tastes like pumpkin cheesecake!). This is a wonderful winter treat, and as the recipe suggests, could even be served in place of eggnog at a holiday gathering. 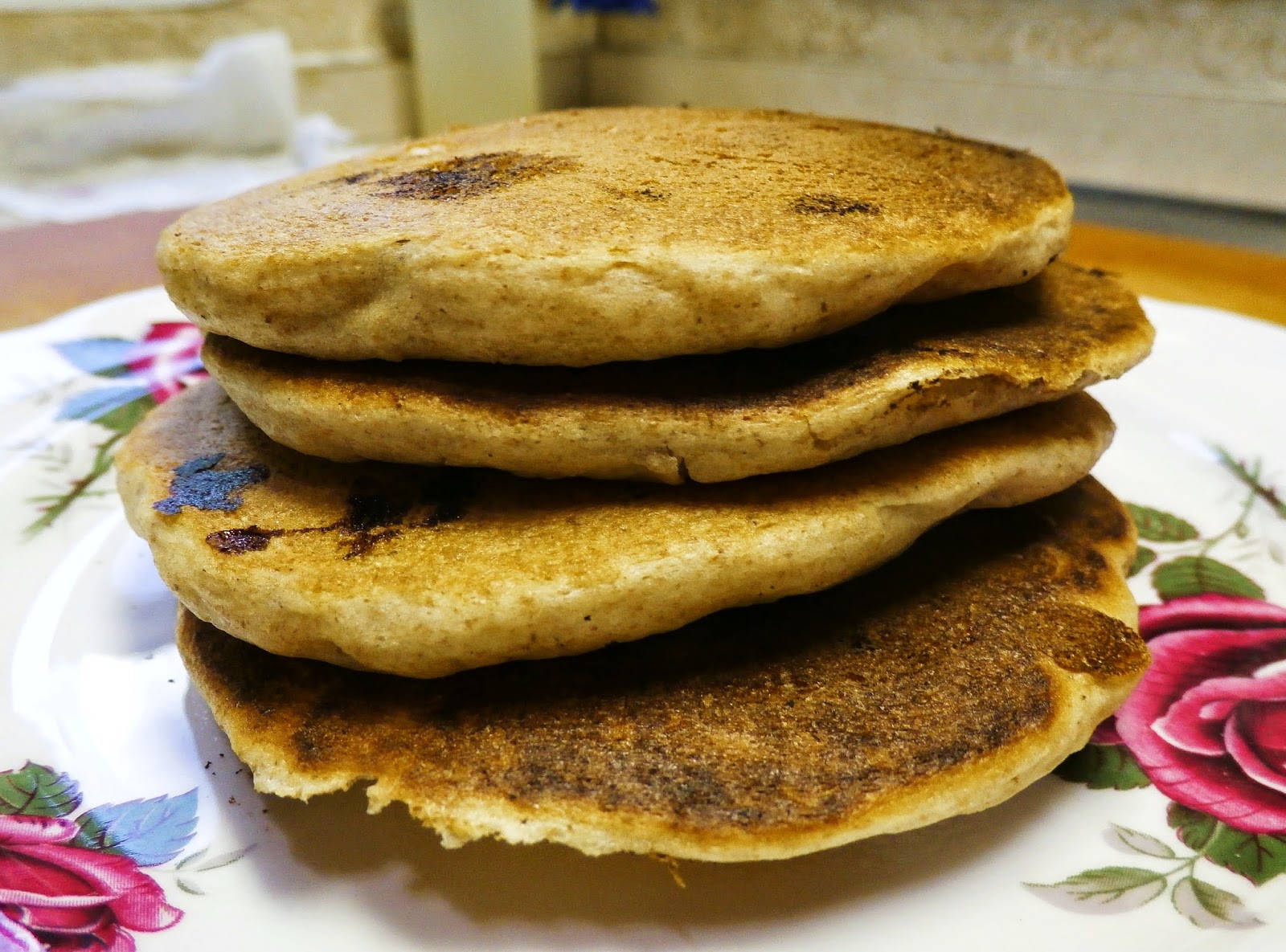 Some people think I had to give up all my kitchen appliances when I moved full time into my 5th wheel trailer. Not so! Others think the only appliance we need is a can opener, and that all our meals are eaten off of paper plates. Also not so! I actually have a very well stocked kitchen with a large variety of cookware, small appliances, and kitchen gadgets. But alas…I do not own a waffle iron…I didn't own a waffle iron before living in my 5th wheel either, but happily the recipe for "Maple-Pecan Waffles" (page 517) states that you can use this same batter to make pancakes if you like. So I did! What an easy recipe, just basic pancake batter with the addition of ground pecans and pure maple syrup. (I also chose to add a few blueberries, easy to do by just popping a few berries onto the batter after ladling onto the hot skillet.) These delicious pancakes are wonderful topped with warm maple or blueberry syrup at the table, and even sprinkling on a few more pecans if you want, as the recipe suggests.

Keeping it "McDougall Friendly" checklist:
Posted by Becky at 3:36 AM 4 comments:

Email ThisBlogThis!Share to TwitterShare to FacebookShare to Pinterest
Labels: Breakfast and Brunch 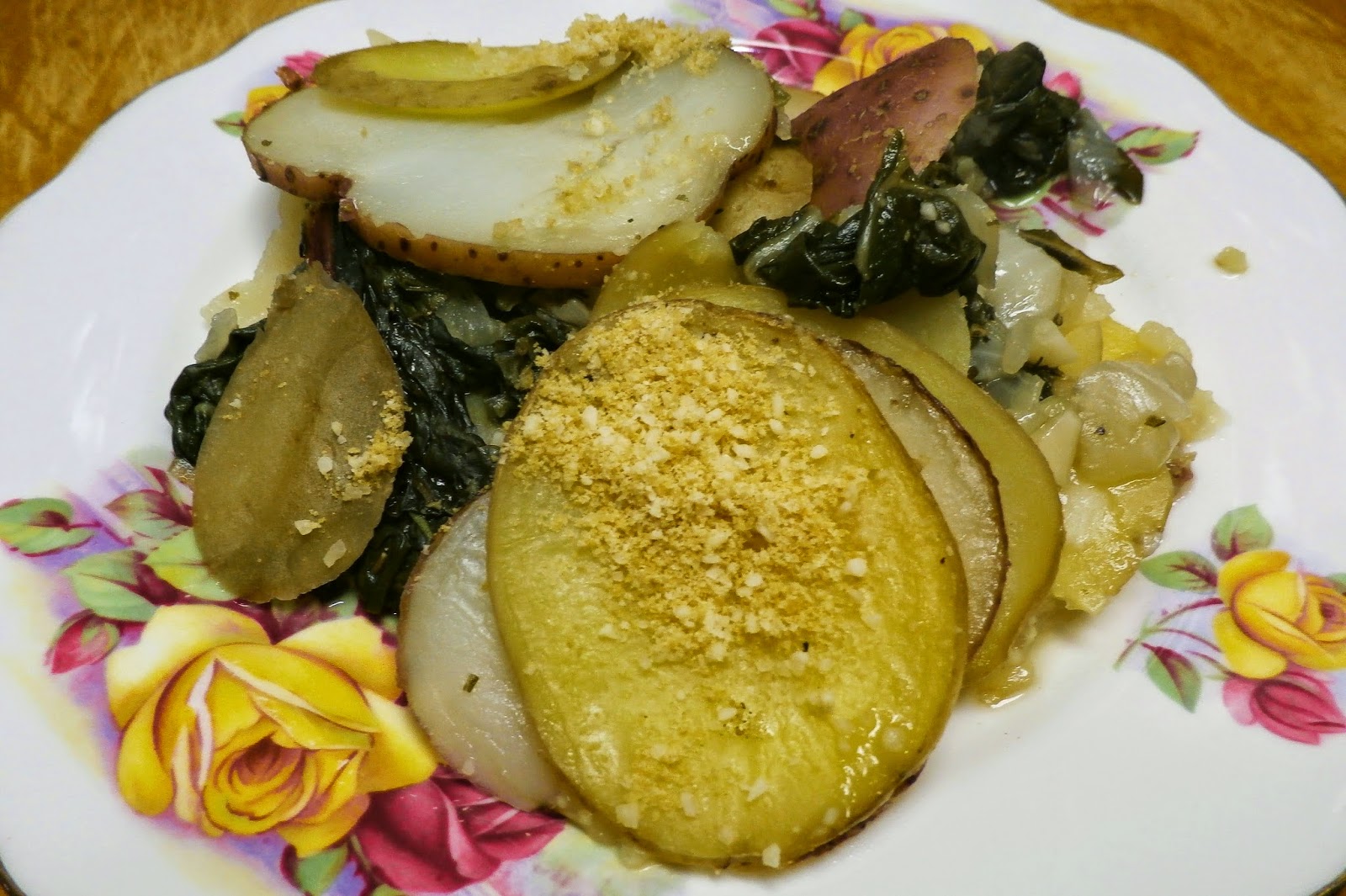 I was able to utilize my husband's skills with a mandoline (a tool for preparing very thinly sliced vegetables) in the "Chard & New Potato Gratin with Herbes de Provence" (page 322), as I am scared to death of slicing off my fingers with this gadget, even with the guard in place. So, whenever a recipe calls for using a mandoline, I ask my husband to do the honors. If you don't have a mandoline (or anyone in your house willing to use one!), you can still make this dish, just slice the potatoes as thinly as possible with a sharp knife. Pre-cooked onion and Swiss chard is layered with the sliced potatoes and herbes de Provence, drizzles of vegetable broth (the recipe calls for drizzling with oil, but I used broth), topped off with vegan Parmesan or Parmasio, and baked in a hot oven for about an hour. Traditionally, gratins are served directly from the baking dish, but I spooned a portion out on a plate for this picture. I love just about anything made with potatoes, and this was no exception. This was actually the first time I used herbes de Provence, an aromatic and delightful blend of rosemary, cracked fennel, thyme, savory, basil, French tarragon, dill weed, Turkish oregano, lavender, chervil and marjoram. I enjoyed this dish for dinner the first day, and diced up and browned in a skillet for breakfast the next morning. 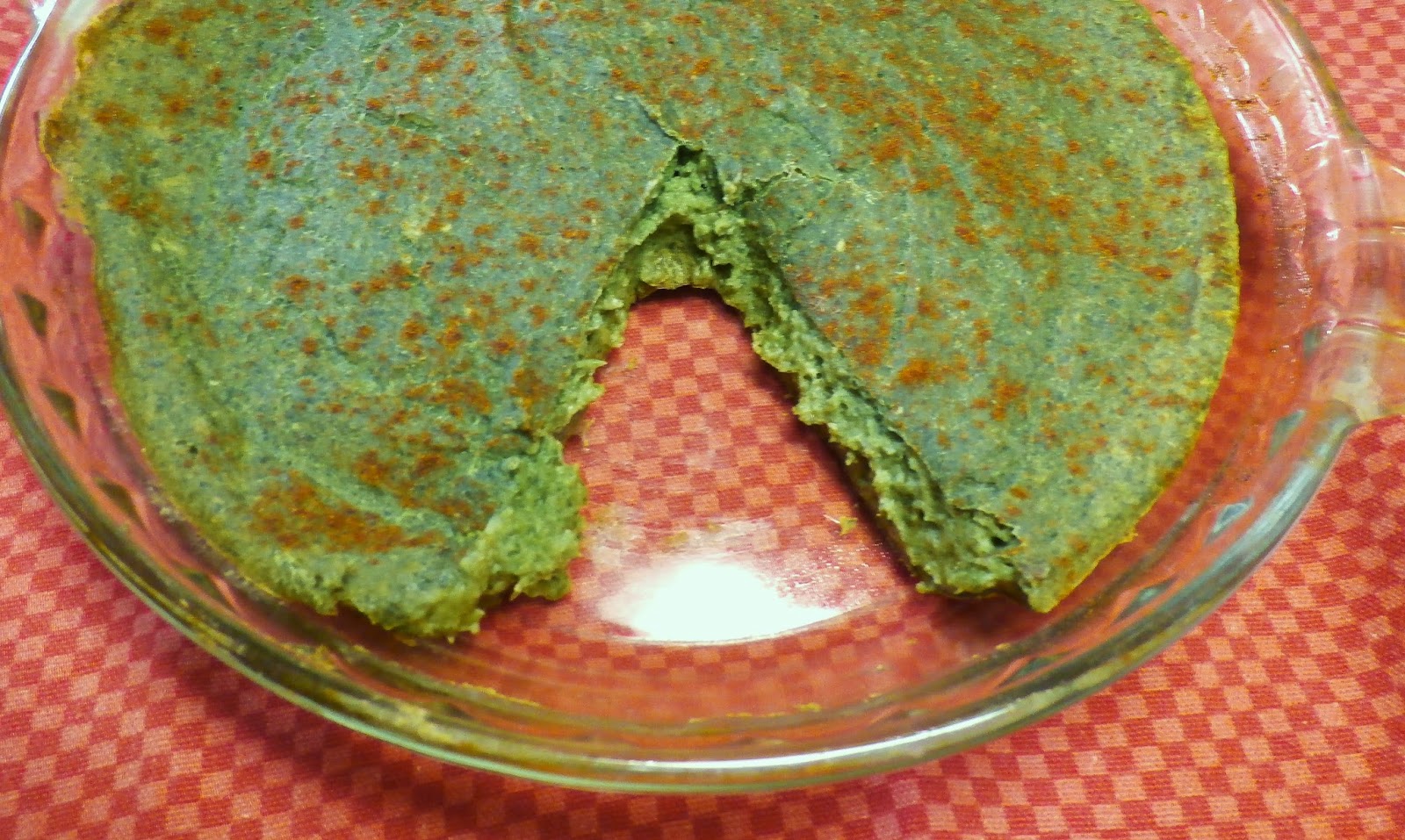 You know how sometimes everything comes together exactly right, and a recipe that is making no sense at all turns out perfectly wonderful? And you know those times when it doesn't…? I've been cooking, reading recipes, even writing recipes for over 40 years, and consider myself comfortable enough in the kitchen to make adjustments on the fly when necessary, and able to recognize when something in a recipe will work, or not. But still, there are those times when you are caught off guard, and you end up scratching your head, wondering what went wrong. Such was the case with the "Spinach Soufflé" (page 329). The basic recipe is a mixture of sautéed onion and spinach combined in a food processor with firm tofu, to which is added flour, ¾ cup broth, and baking powder (plus some soy sauce for flavor, salt, and pepper). The first thing that didn't seem right was the addition of the broth. The mixture at this point was already like a thin cake batter, and I thought adding any more liquid would make it almost soupy. So, I decided against adding any broth at all. I proceeded with the rest of the instructions, scraping the mixture into a casserole dish and baking for an hour. And the end results were…disappointing. I'm not sure why, exactly. It was a texture thing, partly. Possibly not cooked long enough? It was blandness, partly. It really could have used some pizzazz, maybe with the addition of fresh garlic, or red pepper flakes, or both. It could have been my own alterations to the recipe - I used more spinach than called for, maybe half again as much (although it cooks down to almost nothing so it didn't seem like this would matter); I omitted the broth for reasons mentioned above; I excluded the 3 tablespoons of oil. I also have to say, having never made a non-vegan soufflé, having never made any kind of soufflé, maybe I didn't know quite what to expect? In any case, this recipe turned out to be one of the rare recipes from this book I haven't thoroughly enjoyed, truly the exception. 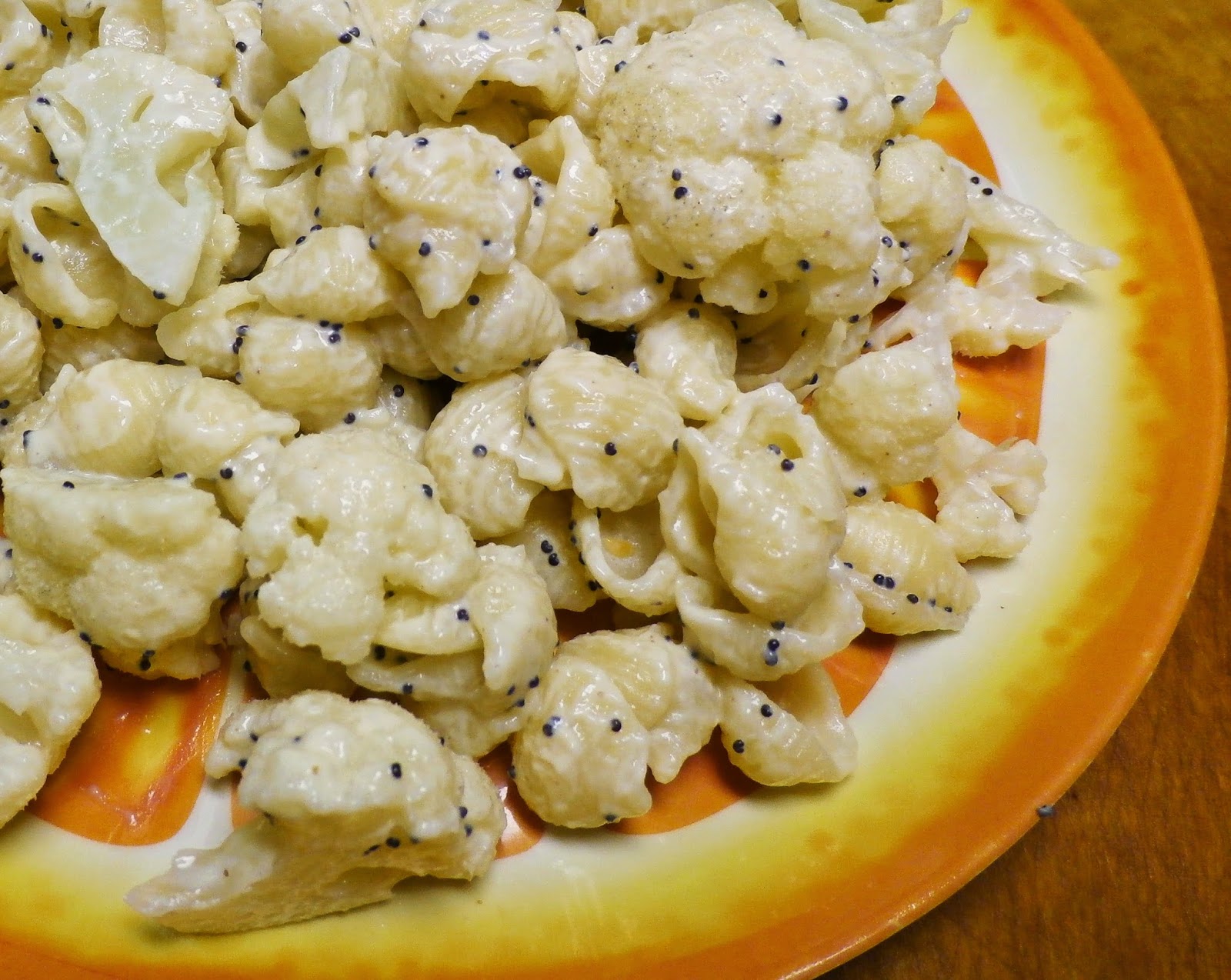 "Farfalle with Crunchy Crucifers & Creamy Poppy Seed Dressing" (page 91) is super fast, super easy, and super tasty! The recipe calls for 2 cups each cauliflower and broccoli, and I had every intention of including both. (You might notice there is nothing green in this photograph.) But on the day I was making this dish, I found to my dismay that my broccoli had spoiled. How often does that happen? Broccoli is a hearty vegetable and should last quite a while under refrigeration. I had it in my refrigerator less than a week. Makes me wonder how long it sat in the grocery store? In any case, I had plenty of cauliflower, so not to be daunted, I doubled up on that. Maybe not as colorful as it might have been, this was still very good, and I think the secret here was the poppy seed dressing. Silken tofu is seasoned with Dijon mustard, cider vinegar, salt, pepper, maple syrup, and of course, poppy seeds. It also calls for olive oil, but I left this out altogether with no substitution needed. Served equally delicious chilled or at room temperature, and the leftovers hold well.