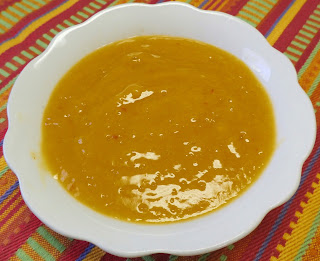 Sauces can take a dish from ordinary to extraordinary, providing complimentary layers of flavor and complexity.  The “Mango-Ponzu Dipping Sauce” (page 558) is a fresh and bold sauce with just a handful of ingredients – fresh mango, ponzu sauce, and chili paste. If you have trouble finding ponzu sauce (normally found in well stocked grocery stores or Asian markets), you can make it from scratch without much effort (recipes abound on the internet). This sauce is hot, sweet, and piquant, all at the same time, and is wonderful served with tofu chunks, spring rolls, tempeh, seitan, or just about anywhere you would enjoy salsa or chutney. I thought it was especially good with the Potato Samosas I reviewed below. Happily, this dish was McDougall Friendly as written, and no modifications were necessary! 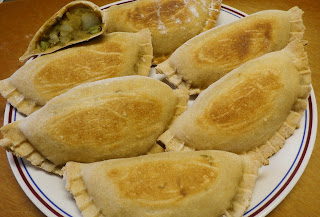 You will find the “Potato Samosas” (page 44) in the Appetizers and Snacks section, but I found these hearty enough to serve as an entrée. I could probably live indefinitely on samosa-like food – hot pockets of dough stuffed with a savory filling. The possibilities are endless, and the comfort food rating is high. I did have to make a few adjustments to omit the oil, as samosas are traditionally fried in a skillet, or even deep fried. The recipe also calls for a significant amount of oil in the dough, and for sautéing the vegetables that go into the filling. The filling consists of potatoes and onion, with the optional addition of green peas, spinach, or cauliflower. (I like adding peas for a burst of color.) The dough is basically a mixture of flour, salt, water, and oil, plus a splash of soymilk, but I replaced the water, oil, and soymilk with 1 cup of plain, unsweetened soy yogurt, which keeps the oil-free dough tender. This recipe does take some time – it is a process – but the results are well worth the effort. If you have a Pocket Pie Crimper for forming the samosas, you will end up with a perfectly formed and pretty pocket, but you can also make these by hand following the recipe instructions. Instead of frying this in a skillet of hot oil, I baked them in the oven for 40 minutes at 375 degrees. Eat these plain, or with one of the dipping sauces suggested in the recipe notes.