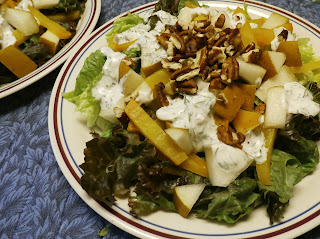 "Yellow Beet Salad with Pears & Pecans" (page 64) takes advantage of fall and winter fruits and vegetables, and if you are lucky enough to find the beets and pears from your local farmers market, this wonderful salad will be even better. (If yellow beets are hard to find, the recipe suggests using red beets in their place. Either way, you really can't go wrong.) A bed of red leaf lettuce is the layered with cooked beets and diced pears, topped with a creamy-herby dressing, and sprinkled with toasted pecans. The combination of sweet, savory, and crunchy creates some sort of culinary magic, and I could have made an entire meal out this salad. I suggest baking the beets (each beet individually wrapped in foil, and baked for about 45-60 minutes, depending on size), rather than steaming them as the recipe calls for, as baking really brings out the best flavor. Pressure cooking them is also an alternative, which is almost as good as baking. This salad takes a little advanced planning, since everything is made from scratch, including the dressing, but you won't be disappointed for taking the time.

Keeping it "McDougall Friendly" checklist:
Posted by Becky at 7:06 AM No comments: Here is another example of bringing coffee bistro fare into your own kitchen, every bit as delicious, and for much less money. "Hot Coffee Mocha" (page 538) is a pleasing blend of brewed coffee, non dairy milk, chocolate syrup, and vanilla extract. Everything is heated together, poured into individual mugs, and topped with a sprinkle of cinnamon. Impress your family and friends with this easy and scrumptious treat whenever the mood strikes! 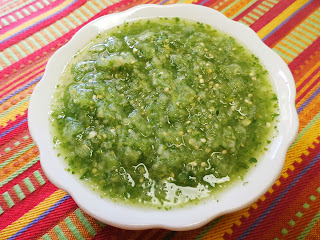 "Tomatillo Salsa" (page 568) is green salsa, made from the small tomatillo which looks like a green tomato, and is in fact, a member of the nightshade family of vegetables, as is the tomato. An easy salsa to make, combining tomatillos, onion, cilantro, jalapeño, lime, and, as a surprise ingredient, capers. The instructions call for chopping and mincing all the ingredients, but I was feeling lazy the day I made this and decided to throw everything into the blender and make a smoother version of this salsa. If you are a fan of green salsas, this is definitely a recipe you will want to try. The recipe notes suggest this would be an especially good topping for rice and beans, and I would have to agree. It would be delicious anywhere you normally enjoy salsa! 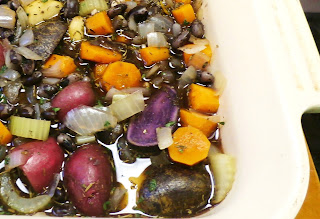 With Autumn just around the corner, you might want to add the "Three-Bean Cassoulet" (page 257) to your upcoming menu. Cassoulet, which traditionally combines some sort of meat and white beans, is a classic stew from the south of France, but one that is baked in the oven, not on top of the stove. This recipe incorporates three separate varieties of white beans - Navy, Great Northern, and Cannellini - calling for a total of 4 ½ cups in all. Sautéed carrots, onions, and celery are mixed with the beans and tomatoes, and generously seasoned with parsley, savory, and thyme. Everything is transferred to a covered casserole dish and baked in the oven for about an hour. Autumn, to me, signals the beginning of heartier, warming meals such as this kind of stew.

I took a few liberties with this recipe. I only used one kind of bean, an heirloom variety called Orca, which I cooked from scratch, which didn't turn out to be the best choice, but I had them to use up, and so I did. I also used just three cups of the cooked beans, and threw in some white and blue potato chunks to make up the difference. Instead of using 1 cup of broth, I used ½ cup of red wine and ½ cup of broth for a richer flavor. I also opted not to top with the breadcrumbs called for towards the end of the baking time because the stew was so juicy (not a bad thing), it seemed to me the crumbs would have just dissolved into the broth instead of sitting atop the veggies.

In retrospect, and especially since I didn't use the breadcrumbs, I think this could just as easily have worked on the stove top in a big Dutch oven or stew pot. But however you make it, as written, or with your own substitutions and tweaks, you just can't go wrong with a pot or a pan of stewed beans and veggies floating in a flavorful broth. 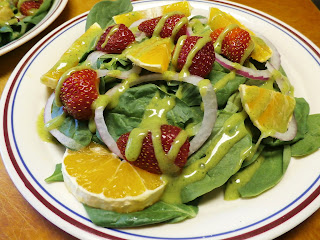 Almost any fruit seems to combine well with fresh spinach, and the "Spinach Salad with Orange-Dijon Dressing" (page 55) is a prime example of this. Baby spinach leaves are topped with orange segments and sliced red onion, and I couldn't resist throwing in fresh strawberries, too, even though the recipe didn't call for them. The dressing consists of Dijon mustard, orange juice, agave nectar, plus fresh parsley and green onions, processed in a blender until smooth. (I left out the olive oil, and didn't miss it at all.) This salad makes a lovely starter to any meal, but is especially nice on a warm summer evening when you want something light. 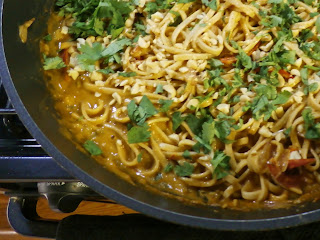 "Noodles with Spicy Peanut Sauce" (page 243) is a recipe found under the Asian Noodles section of the Pasta & Noodles chapter, and is one of my favorite ways to enjoy Asian noodle dishes. Using any variety of flat noodle, the flavorful sauce is what makes this dish go. Fresh garlic and ginger, soy sauce, chili paste, and peanut butter make up the base sauce, with the addition of onions, bell pepper, and cilantro. This is a classic combination of ingredients for first class Asian dining. If you are feeling more casual, you can serve this dish right out of the skillet from the stovetop, making it a one-dish meal - that's what I did! If you have any leftovers, this dish holds up well in the refrigerator for a nice lunch a day or two later. Feel free to up the spice level by increasing the amount of chili paste. The recipe calls for ½ teaspoon, and I used 1 tablespoon. Could be some Asian chili sauces are spicier than others. There is a sizeable amount of oil called for here; 3 tablespoons of sesame oil to toss the cooked noodles in, and 2 tablespoons of oil for sautéing the veggies. If you chose to use the full amount - 5 tablespoons - you will be adding 69 grams of fat and 608 calories to this dish. I opted to leave out both oils. The peanut butter in the sauce adds plenty of richness and flavor, and packs its own wallop of fat and calories. As I usually do, I used only 8 ounces of noodles instead of the one pound called for, as I prefer my pasta dishes quite saucy.