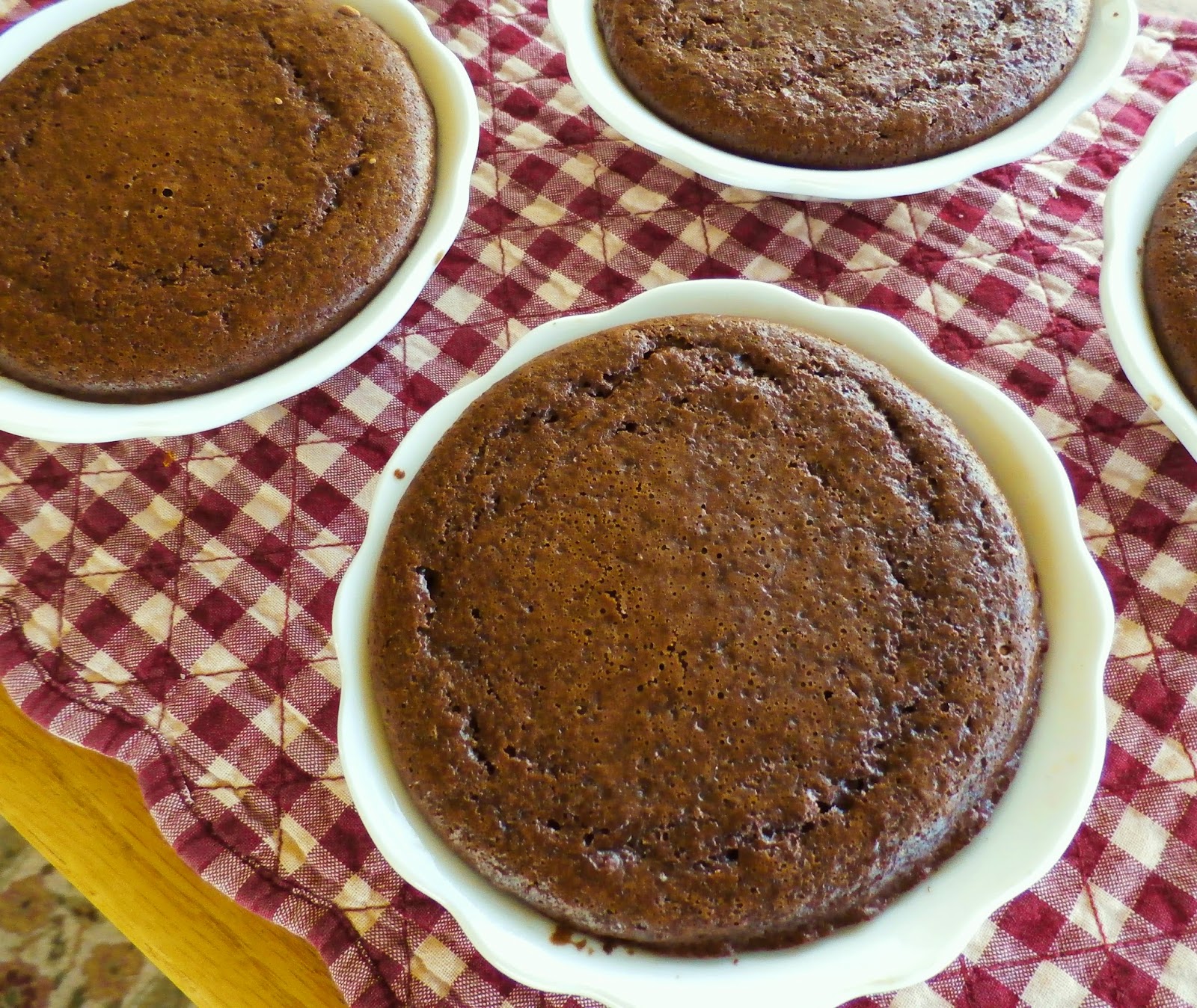 I've made a lot of pudding in my life, going back a long, long way. I've made many different types of pudding, from that instant powdered stuff that comes in a box, to the "from scratch" versions that are cooked over the stove, to baked puddings and custards in water baths in the oven. In recent years I've started making vegan puddings using everything from silken tofu, to soymilk, to corn butter as the base. My favorite flavors are chocolate and butterscotch and I've been able to master beloved versions of both in my plant based diet. And, if there is one consistent thing about all these puddings, it's that they more or less wind up with similar outcomes, that is, the end product is sweet, soft and creamy. I've never made a pudding, for instance, that ended up being cake…until now! The "Baked Chocolate Pudding" (page 473), whether by accident or design, is really a recipe for chocolate cake. I'm still scratching my head trying to figure out if this was the intended goal, or if there was a misprint in the ingredients list in the recipe. The ratio of liquid (1 ½ cups soymilk) to flour (1 cup) seemed odd to me, and as soon as I had all the ingredients mixed together, including baking powder, it was clear that this would result in a cake, not a pudding. But what the heck - chocolate cake is good too!  I scraped the batter into individual serving dishes, baked as directed, and enjoyed these petite cakes very much! For the small amount of oil called for in this recipe (only 1 Tablespoon), I decided to use a tablespoon of peanut butter instead. That amount is not enough to interfere with the chocolate flavor, although I happen to really enjoy the combination of peanut butter and chocolate, and I will think about this idea for future baking projects. 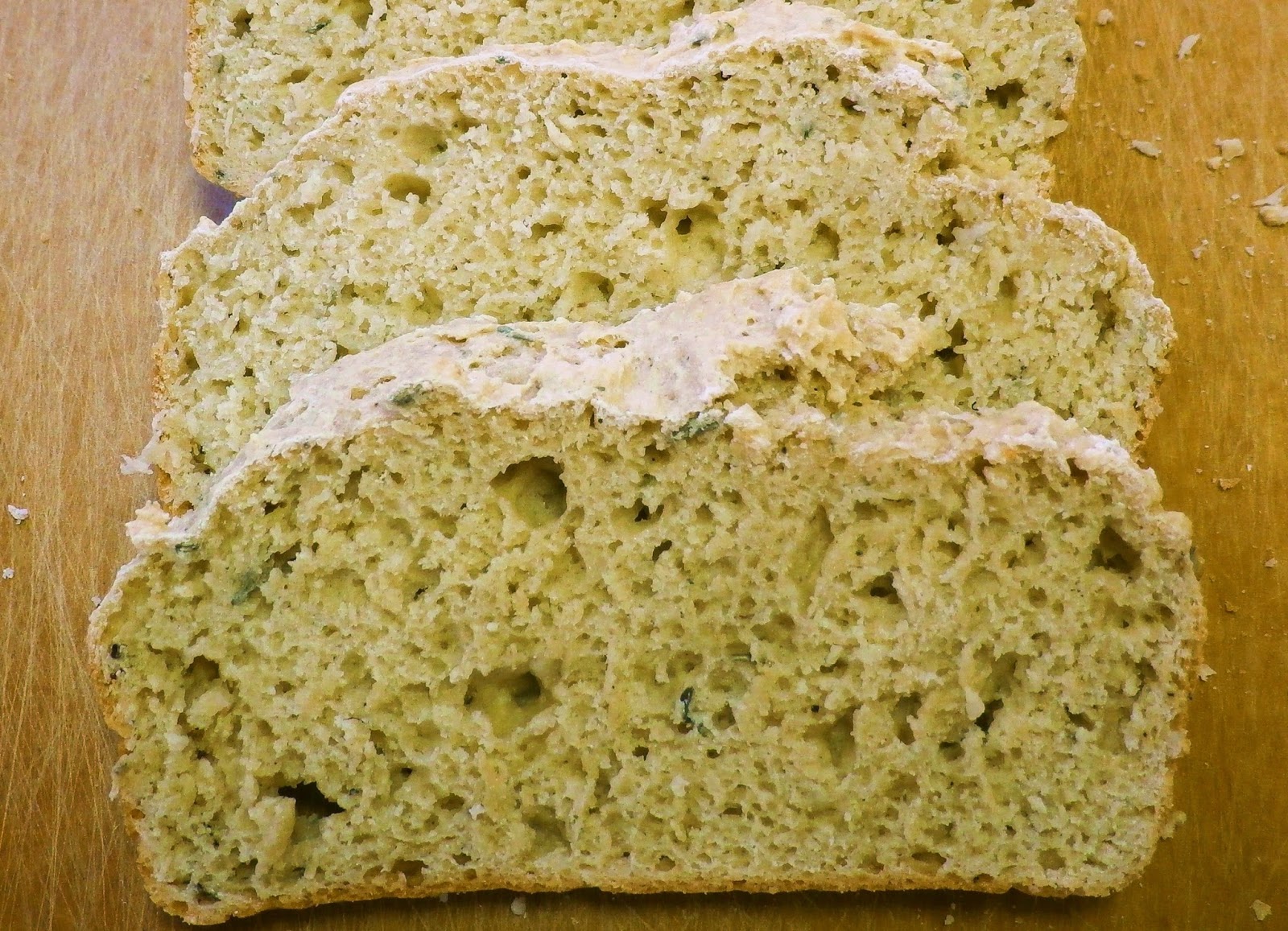 "Quick Herb Bread" (page 399) is the first of twelve quick breads (meaning non-yeasted) in the Breads chapter of this book, and the ninth one I've tried so far. I really enjoyed this bread, and found it made especially good toast. Besides the herbs listed in basic recipe (basil, thyme, and marjoram), the recipe suggests using any combination that sounds good to you or complements your meal. I went with the recipe as written, and if I were to change anything, I might increase the amounts of herbs, as the taste was quite subtle to me.  This bread is easy to make, and goes together quickly. Flour (I used whole wheat pastry flour), baking powder and the herbs are mixed with soymilk, and if you followed the recipe exactly, oil as well; I used a scant ½ cup applesauce instead of the olive oil with excellent results.

Email ThisBlogThis!Share to TwitterShare to FacebookShare to Pinterest
Labels: Breads 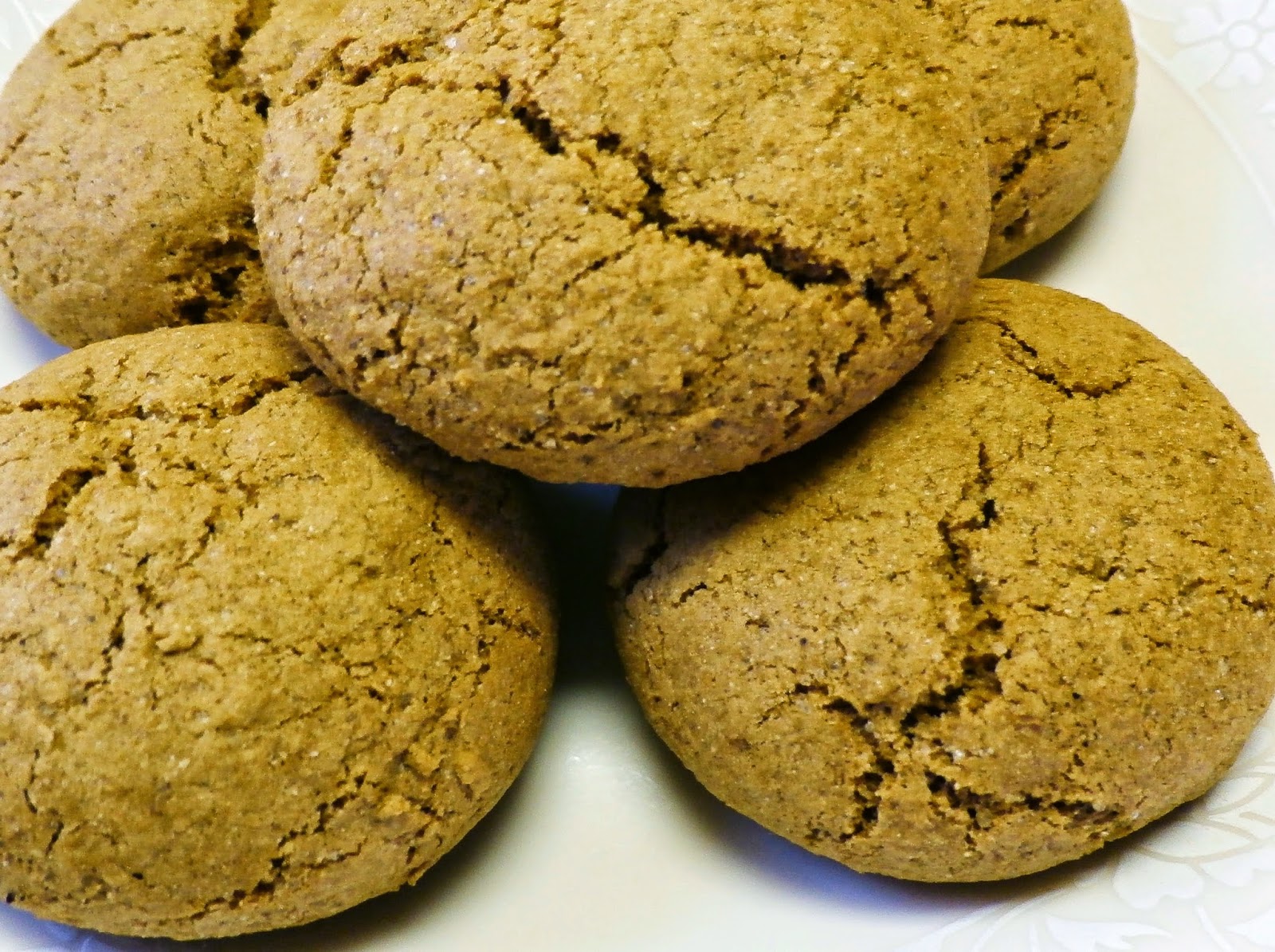 If cookies are what you are craving, you might want to try the "Molasses Spice Cookies" (page 433). The recipe uses molasses as part of the sweetener (along with sugar), and a list of spices that you might find in pumpkin pie - ginger, cinnamon, and allspice. And, as you might expect, the recipe also calls for margarine, in this case ¼ cup. However, I have been so pleased with the results of my fat-free baking efforts lately that I wasn't at all daunted by substituting ½ cup applesauce for the margarine. (Pureed prunes would also have worked here, since the cookies are already a nice brown shade from the molasses). The instructions say to form the dough into two logs, wrap in plastic, and chill for at least one hour, at which point you are to cut thin slices off of each log to put on the cookie sheet and bake. I'm not sure, but I think the fact that I didn't use margarine interfered with being able to slice the dough. The dough didn't firm up, as I'm thinking it might have had I used  margarine. But this did not stop me from forging ahead. I simply formed dough balls instead of dough slices, placed those on the cookie sheet, and baked as directed. These cookies were delicious, and I can't imagine the flavor was compromised whatsoever by my modifications. As the recipe notes say, these cookies are wonderful with a cup of hot tea. 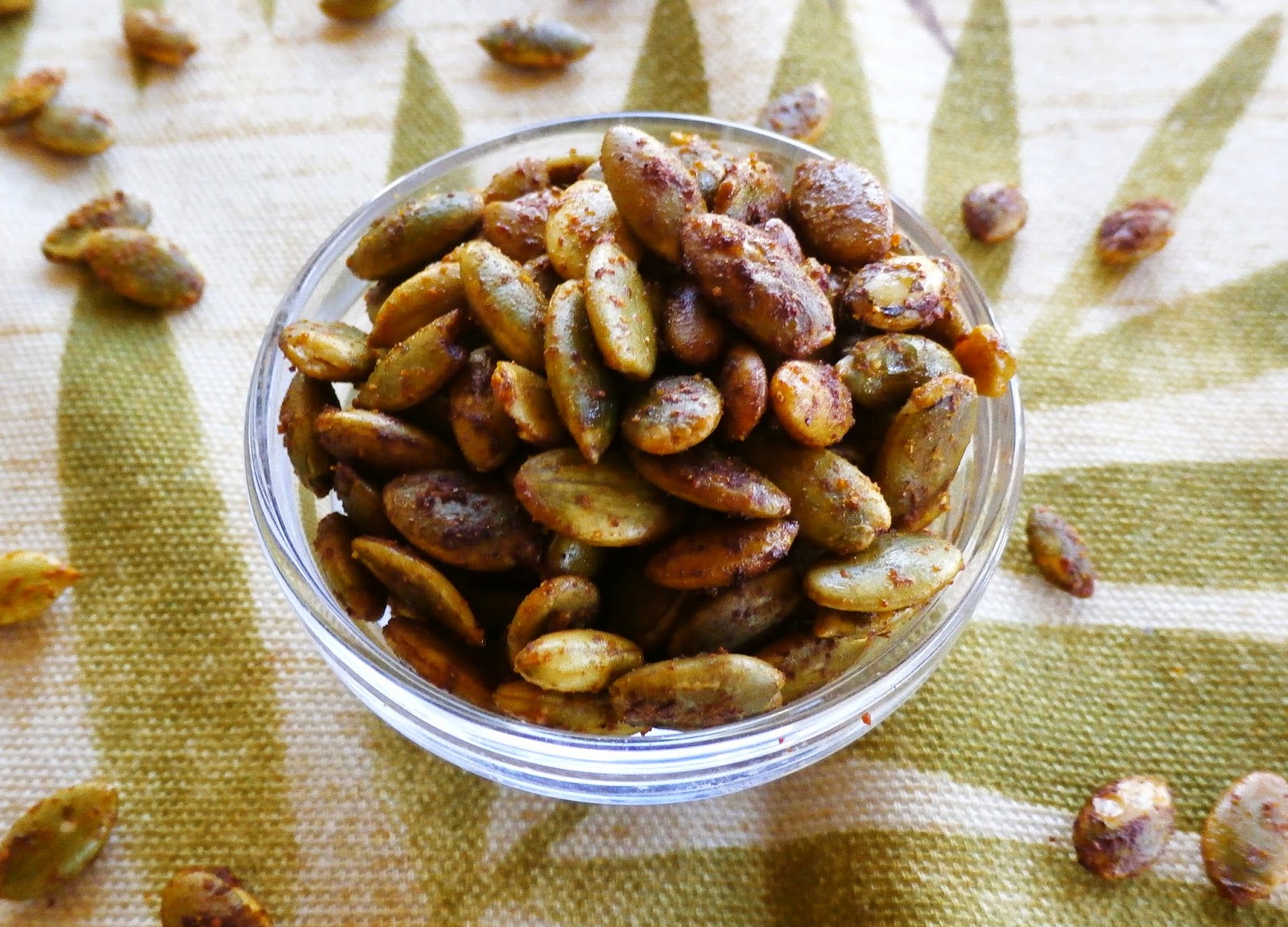 The recipe for "Fiery Pumpkin Seeds" (page 6) was very easy to modify to omit the oil. All nuts and seeds have a considerable amount of natural oil in them that can be utilized without having to add any more. This particular recipe calls for a lot of oil - ¼ cup, which I think would have resulted in overly oiled seeds. I thought using a small amount of pure maple syrup would be a good substitute for the oil, coating the seeds with something sticky for the spices to adhere to, plus the combination of slightly sweet, slightly salty, and a bit spicy really appealed to me. This approach worked like a charm, and the end result was fantastic! The "fiery" part of this recipe comes from Tabasco sauce, and the seeds are further seasoned with paprika, cumin, and salt. These are a great snack to set out at a gathering - otherwise, you might find yourself eating them all too quickly by yourself!

Email ThisBlogThis!Share to TwitterShare to FacebookShare to Pinterest
Labels: Appetizers and Snacks 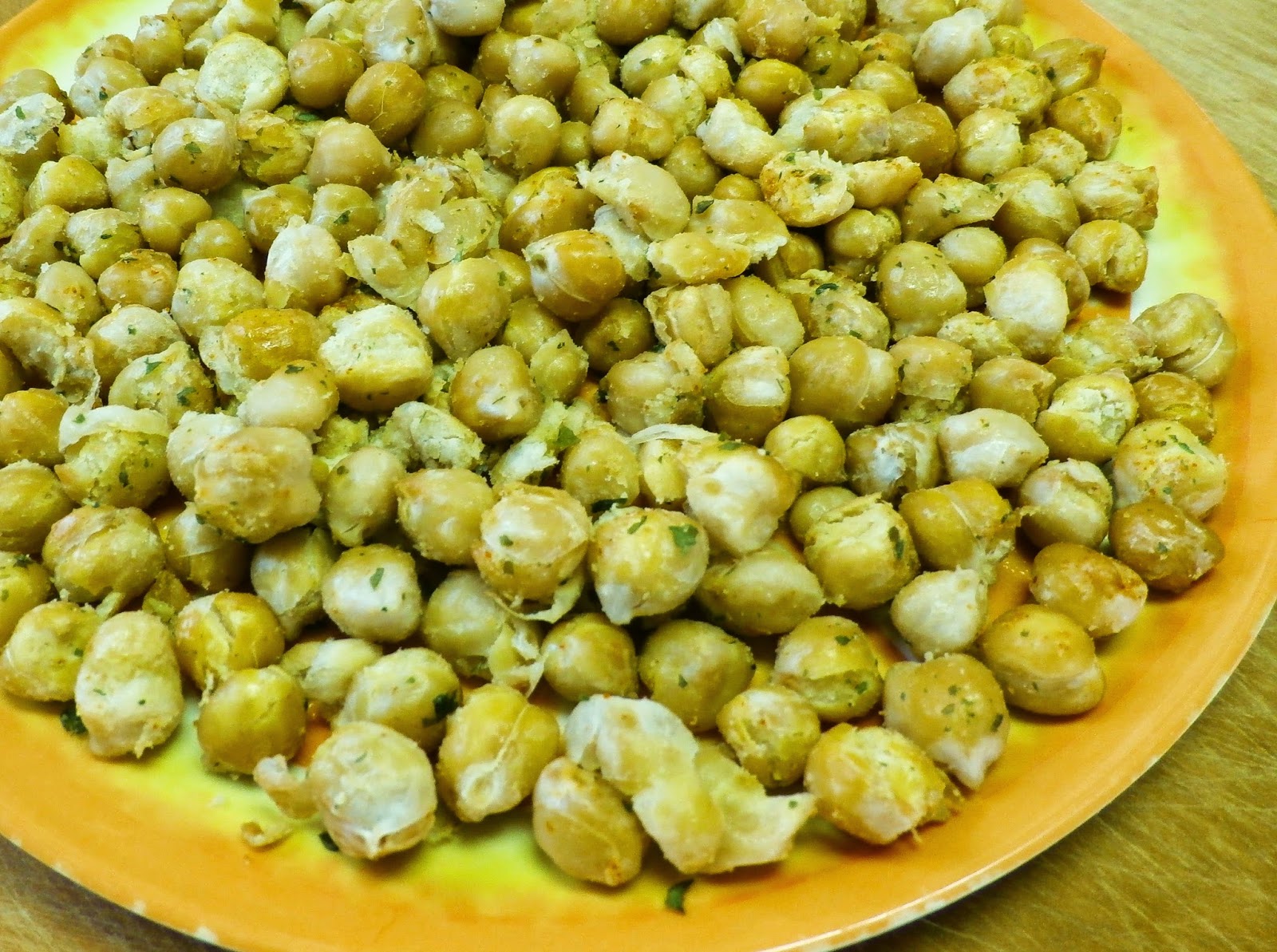 The recipe for "Roasted Chickpeas" (page 5) conjured up gustatory visions of those crunchy wasabi peas found in bulk sections of some grocery stores or in cans in the Asian food section.  Crunchy and salty, even spicy if so desired, definitely one of those addictive foods. But leaving out the oil in this recipe transforms the texture considerably, so I realized that I was not going to end up with this kind of snack after all. No matter, these are still fun munchies, either eating warm out of the oven, cooled to room temperature, or tossing into a salad. If you have cooked chickpeas on hand, these are super easy to make - drain and rinse, spread in a pan, top with seasoning, and bake until browned (in this case, they won't be "crisped"). The small amount of moisture left on the beans after rinsing them will help the seasonings adhere to them. Start with salt as a seasoning, but add whatever else sounds good to you, the possibilities are endless!

Email ThisBlogThis!Share to TwitterShare to FacebookShare to Pinterest
Labels: Appetizers and Snacks 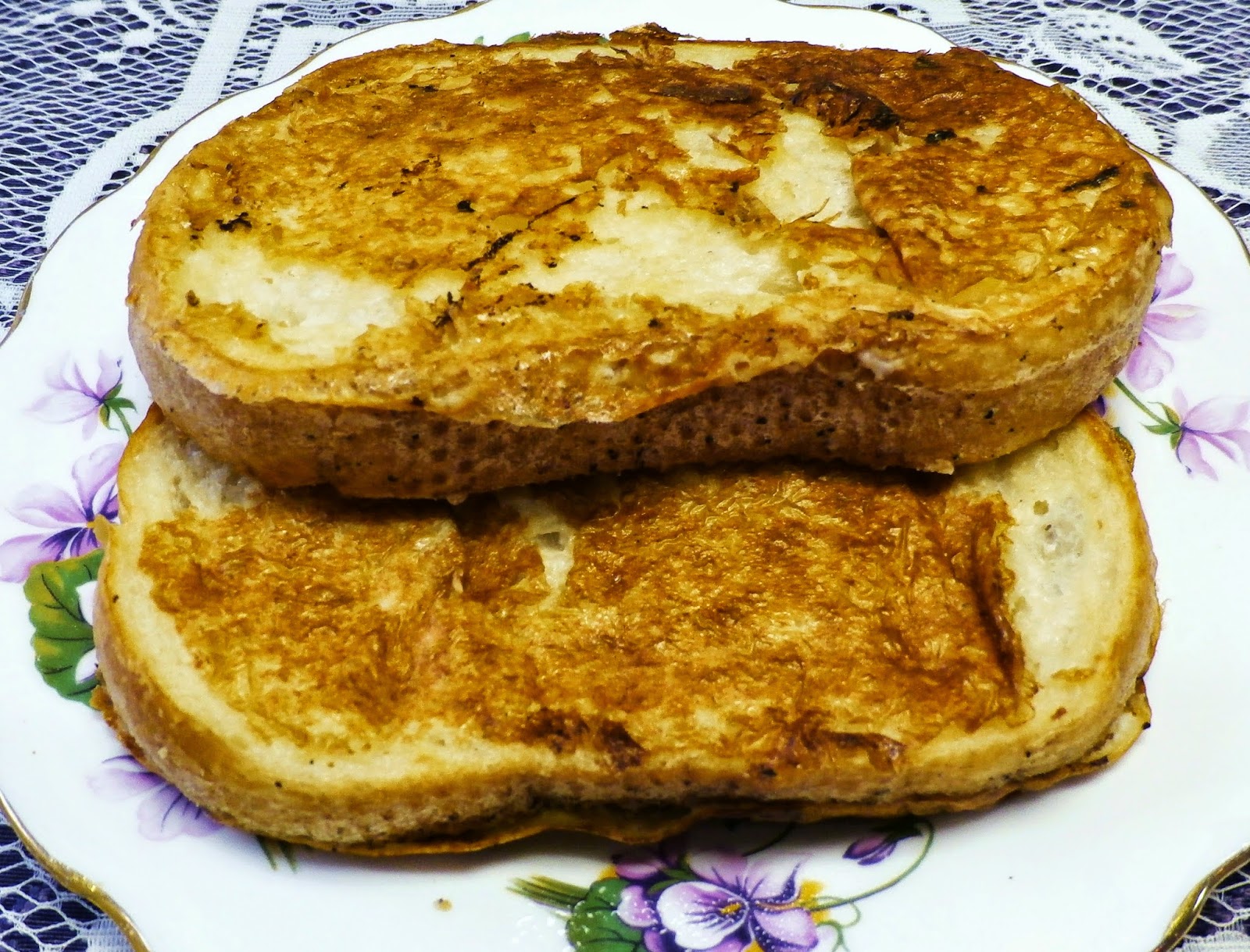 When people find out I don't eat any dairy or eggs, they invariably get around to asking me how I manage without French toast. The answer of course, is I don't go without at all! Making French toast without cow's milk or eggs is so easy, and there are so many ways to do this, that nobody can tell the difference between the two. "Very Vanilla French Toast" (page 519) uses silken tofu and soymilk for the liquid component, and cornstarch to thicken things up, thus eliminating the need for both cow's milk and eggs. Flavored just slightly with sugar and pure vanilla extract, this is a simple recipe that allows the quality of the bread to shine through. Get the best Italian, French, or sourdough bread you can find, it really makes a difference! We used sourdough bread from Panera, and it was exquisite! Top with warmed pure maple syrup, or fruit topping of your choice to complete the presentation. The recipe calls for a tablespoon of oil to be added to the liquid portion of the dipping mixture, but leaving it completely out is no problem at all, you won't even miss it.