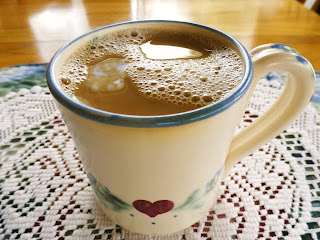 You don't have to go to expensive trendy cafés to enjoy designer coffee drinks. You can easily create them in your own kitchen at a fraction of the cost and without leaving the comfort of your home. The "Soy Latte" (page 538) is made from two ingredients: Hot strong coffee, and soy milk. (Sugar is optional). Simply top hot coffee with steamed soy milk (using a milk steamer, or whisking over the stove), and that's it! This is a nice indulgence when a little pick-me-up is needed. 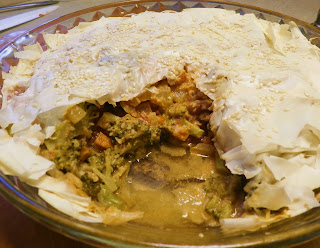 "Sesame-Baked Vegetables" (page 319) presented me with a big challenge. Since my goal is to try to keep these recipes oil free and whole grain, I quickly realized I wouldn't be able to use the puff pastry this dish called for. As it turns out, one of the defining ingredients of puff pastry is solid fat (butter, shortening, or lard) that is combined with white flour in a particular way that causes it to "puff" during baking. I perused the frozen foods section of several stores looking for any puff pastry that might be made with less fat (most of it seemed to be close to 50% fat), or at least not a solid fat. I totally gave up on finding a whole grain version - that was much too esoteric. But I soon realized that anything called Puff Pastry, by definition, is going to be some sort of solid fat combined with white flour. The puff pastry in this recipe is used as a topping for a mixture of sautéed and seasoned veggies (broccoli, onion, carrots, and tomatoes), creating a sort of vegetable pot pie. (The sesame in this recipe comes from seasoning the vegetables with sesame tahini and soy sauce, and sesame seeds are sprinkled on the "pie" as well.)

I finally decided to use phyllo dough instead of the puff pastry, a flaky dough product dramatically lower in fat (Puff Pastry = 60 grams of fat and 1606 calories per sheet / Phyllo Dough = 1 gram of fat and 57 calories per sheet). As you can imagine, using phyllo dough significantly changed the intended presentation of this dish, and to be honest, I'm not sure this was really a good substitution. For one thing, I'm not all that experienced working with phyllo, and I wasn't quite sure how to turn it into a veggie pot pie topping (I used 3-4 sheets to obtain the desired thickness in the "crust"). In retrospect, I think maybe just sprinkling seasoned panko breadcrumbs over the veggies in the baking dish would have been a better choice. But despite my fumbling attempts to make this dish into something it was never intended to be, I still enjoyed the baked and seasoned veggies which were flavorful regardless of what was put on top of them.

Keeping it "McDougall Friendly" checklist:
Posted by Becky at 8:02 AM No comments: 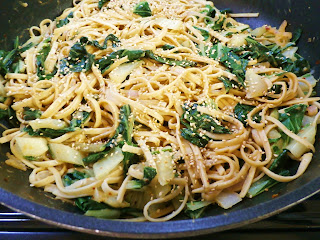 If you want a quick, delicious, and nutritious meal, think about making the "Bok Choy & Ginger-Sesame Udon Noodles" (page 238). Cooked udon noodles and steamed bok choy are tossed with a flavorful sauce of tahini, soy sauce, mirin, and ginger, and slightly spiced with red pepper flakes. This easy dish comes together so fast, you can have it on the table in about 30 minutes. I've noticed many of the recipes in this book use a "rule of three" (my interpretation) where a particular ingredient is incorporated in three different forms. In this recipe, it's sesame that comes in three ways: sesame oil, tahini (sesame seed paste), and whole sesame seeds. However, I opted not to use the sesame oil to coat the cooked udon, figuring the tahini and sesame seeds (sprinkled on top of the dish at the very end) would provide plenty of sesame flavor, and it really isn't necessary to toss cooked pasta in oil if you rinse it well after cooking. The recipe notes suggest the addition of sliced shiitake mushrooms as a variation, something I might try next time around.

Email ThisBlogThis!Share to TwitterShare to FacebookShare to Pinterest
Labels: Pasta and Noodles 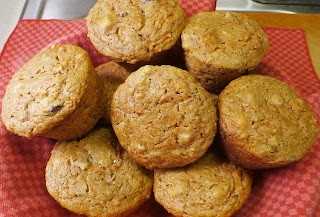 The "Carrot Bread with Cranberries & Walnuts" (page 406) wraps up the section of Quick Breads in the Breads chapter of this book. I do believe this was a case of saving the best for last. I opted to make muffins instead of a loaf, a suggestion in the recipe head notes, and these were among the tastiest muffins I've ever made. Not so long ago, it would have been hard to convince me that a muffin containing no oil, dairy, or white flour could be so tender and moist, but I've been perfecting my skills when adapting recipes to this way of eating, and it's finally paying off. Any baked good containing fruit or vegetables will have a boost when it comes to staying moist, so the carrots and cranberries in this recipe helped with that. Spiced with cinnamon, allspice, and ginger, sweetened with brown sugar, and using applesauce instead of oil, all combined to make these muffins fruity and delicious. I will definitely be making these in the future, both as loaf bread, and as muffins.

Email ThisBlogThis!Share to TwitterShare to FacebookShare to Pinterest
Labels: Breads 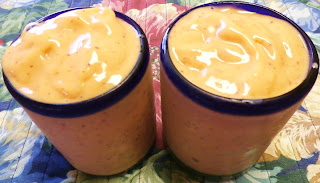 The "Stone Fruit Smoothie" (page 530) takes advantage of the summer stone fruits - peaches, plums, and apricots - to make a more unusual smoothie, straying from the typical berries, orange juice, and banana combinations. Mixed only with nondairy milk (plain or vanilla), this is a simple concoction and a great way to enjoy part of the summer bounty. Again, I like to pre-freeze my smoothie fruit so I have a thick end result, but the recipe does not require this, calling for the addition of ice cubes instead. If your fruit isn't super ripe and/or sweet, you might want to add a small amount of pure maple syrup, agave syrup, or other sweetener of choice. 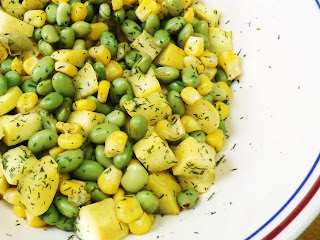 "Yellow Squash with Corn, Edamame, & Dill" (page 384) puts a modern twist on succotash, a dish popular during the Great Depression in the United States. Because of the availability of ingredients (and being relatively inexpensive) during this era, any combination of lima beans, corn, and shell beans fit the description of succotash. In this variation, edamame stands in for the lima beans (good news for all those lima bean haters out there), and is jazzed up with fresh dillweed, lemon juice, and cayenne. The recipe calls for the addition of olive oil, but I just left this completely out and didn't notice the difference. If you wanted to add some liquid to the mix (not really necessary), you could drizzle it with veggie broth.