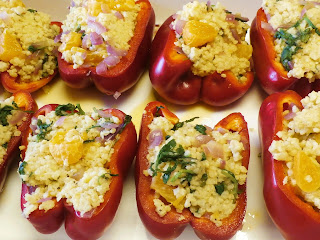 “Millet-Stuffed Bell Peppers with Watercress & Orange” (page 336) puts a novel and delicious spin on the traditional stuffed pepper. Millet isn’t a common grain for most of us living in this country, but the more ways I find to use it, the more I appreciate it. It is versatile, nutritious, and as a bit of a chameleon, can adapt itself to dishes ranging from sweet to savory. In this simple preparation, cooked millet is mixed with sautéed onions, watercress, chopped orange segments; mildly seasoned with pepper and coriander; then stuffed into bell pepper halves. These bake in orange juice until the peppers are tender, and the millet stuffing is heated through. Use any color of peppers that pleases you; I found red peppers on sale at the market the week I made these, so that is what I used. I made a couple of changes to the recipe to suit my own tastes. First, I didn’t pre-cook the pepper halves in boiling water before stuffing and baking them. I find this step softens the peppers more than I like, and the bake in the oven is enough for me. I also spooned the orange juice over the stuffed peppers, rather than pouring it into the bottom of the baking pan so the millet could soak up the delicious flavor. These keep well, so you won’t mind if you end up with leftovers – in fact, you’ll be glad of it! 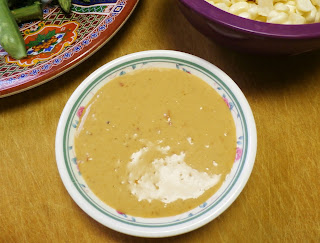 Lately I’ve been experimenting with multiple versions of Bowl Food, a delicious way to prepare a healthy and delicious feast in a bowl. The concept is to create a layered meal of grains, beans (or tofu, tempeh, seitan, etc.), lightly steamed veggies, and raw or lightly cooked greens, all topped with a flavorful sauce. The possibilities are endless, as you can imagine. I used the “Coconut-Peanut Sauce” (page 557) to top a bowl meal consisting of brown rice, baked tofu, sugar snap peas, corn-off-the-cob, and steamed kale. Honestly, this sauce would add sparkle and pizzazz to anything you drizzled it on. The flavor combination of peanut butter, coconut, ginger, garlic, soy sauce, lime, and cayenne is a match made in heaven and the ultimate in Asian sauces. The recipe calls for coconut milk, a product very high in saturated fat. One cup of coconut milk contains 552 calories, and 57 grams of fat (51 of those saturated fat). By contrast, one cup of almond milk contains 30 calories, and 2.5 grams of fat (with 0 grams saturated fat). For this reason, I chose to create a substitute for the coconut milk in this recipe by mixing ½ teaspoon of coconut extract with one cup of almond milk. This is a delicious way to get the creaminess and flavor of coconut milk with almost zero fat. Your arteries will thank you, and your taste buds won’t know the difference! 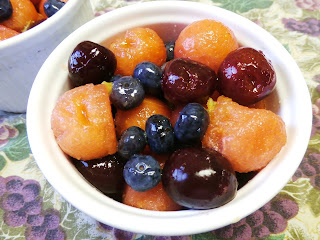 “Cherry Berry Watermelon Salad” (page 98) is not only delicious to eat, it’s beautiful to look at. Bright and colorful, this salad consists of watermelon, cherries, and blueberries tossed with a simple dressing of fresh orange and lime juice, vanilla extract, and a teaspoon of sugar (which I consider optional – the fruit provides all the sweet you could possibly want!). This is as delicious for breakfast as it is dessert, and would make an excellent addition to any meal.

No changes necessary!
Posted by Becky at 6:33 PM No comments: