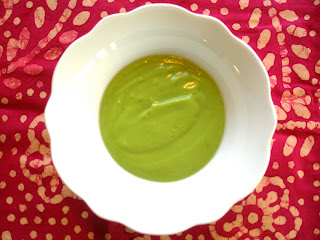 One of the things I really like about staying in is I can always find tortillas, cilantro, and avocados, and reasonably priced!  Originally from , it has been rather shocking to find ourselves in places where there is nary a tortilla to be found, and nobody has even heard of cilantro.  Today in the market there was a huge bin of avocados all perfectly ripe and ready to eat, so I bought a couple and turned one of them into "Creamy Avocado Dressing" (page 102).  I think I've just found my new favorite salad dressing!  The recipe gives you an option to use either lemon & parsley, or lime & cilantro, as part of the ingredients.  I opted to go with the lime and cilantro (Go Texas!) and that, along with just a smidge of cayenne and some fresh garlic, convinced me the name of this should be changed to Guacamole Dressing.
The recipe called for ¼ cup oil, but I knew the avocado would provide enough natural oil so that any additional would be unnecessary, and would not be missed.  Instead I used two tablespoons each water and soymilk to provide the liquid measure.  After everything was blended up, it was very thick and creamy, as is no doubt the intention, and would be perfect at this consistency as a dip or even a spread on a sandwich or a veggie burger.  But I wanted it a little thinner, so I added another two tablespoons of water to obtain the consistency I wanted for use as a salad dressing.
All I can say, it was a good thing there were no chips in the house, because if there had been, I don't think this dressing would have lasted until dinner!
Posted by Becky at 2:49 PM No comments: After all the rich food over the several days of feasting on Thanksgiving fare, I was ready for something elemental and full of vegetables, just like the "Autumn Medley Stew" (page 261).  There were plenty of root vegetables, including a potato, carrot, parsnip and potato, along with butternut squash, cabbage, tomatoes, and seasoning.  Chunks of seitan, garbanzo beans and angel hair pasta added bulk and thickness, making this a complete meal in a bowl.  White wine added to the broth added a nice dimension, and all the flavors blended into a wonderfully warming meal on a cold autumn night.  I omitted the oil (used to sauté the onion), but I was unable to find any whole grain angel hair pasta. Since it was not the predominant ingredient in the recipe, I wasn't too concerned about making this concession.  I did end up using almost three additional cups of liquid above what the recipe called for. Some of this came from not draining the can of diced tomatoes (the recipe indicated they should be drained, but I thought that would be a waste of flavorful liquid that would taste good in the stew) and I added two more cups of broth as well.  Part of this is because I wanted this to be a little broth-ier than a traditional stew, but also because it didn't look to me like the pasta would cook in the amount of liquid in the stew when it was time to add it.  Another option would be to cook the pasta first.
Posted by Becky at 1:58 PM No comments: 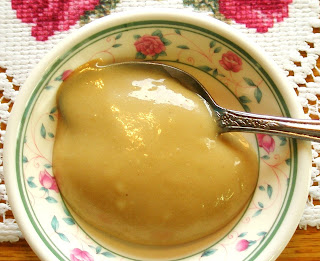 I was looking for a topping for the vegan pumpkin pie I made for Thanksgiving, and decided to give the "Cashew Crème" (page 501) a try. Because of the recipe description, I was thinking it would somehow remind me more of a whipped cream style topping, like the tofu based crème toppings I have made in the past.  But the Cashew Crème came out a beautiful rich golden color (due to the dark maple syrup) that made me think more of butterscotch or caramel sauce. Oh, is this topping ever rich, creamy, and sweet!  The consistency is thick and smooth, and the flavors blended wonderfully with the pumpkin pie, each bite melting in my mouth feeling like pure decadence. I think this Cashew Crème would be good on vegan ice cream, mixed into a bowl of fruit, spread on cakes, just about anywhere you want a thick, sweet dessert topping.  No changes were necessary to make this compatible with the McDougall Plan - although I'm sure Dr. McDougall would caution us about the high fat content of the cashews and advise only an occasional indulgence! ;-)
Posted by Becky at 2:20 PM No comments: 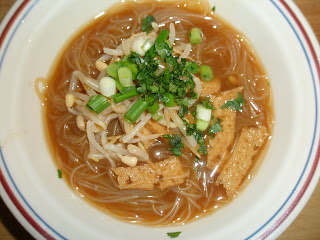 The first thing I added the Basic Simmered Seitan to (see previous review) was the "Vietnamese-Style Noodle Soup" (page 151).  This soup is so satisfying, so flavorful, and so perfect on a cold day.  I had left over broth from preparing the seitan, and it made the perfect base for this noodle soup.  There are so many good flavors in this soup, and they all blend so harmoniously.  With each bite you notice something else - was it the miso, hoisin sauce, ginger, star anise, lime?  Who cares, it's all good!  These are the flavors that are simmered into the broth, to which you add rice noodles and slivered seitan.  Top this off with sprouts, cilantro, and green onion, and you have the perfect vegan version of Pho, Vietnamese noodle soup.  The only change necessary to make this McDougall friendly was to omit the oil for sauteing the onion.
Posted by Becky at 10:21 AM 2 comments:

Email ThisBlogThis!Share to TwitterShare to FacebookShare to Pinterest
Labels: Soups 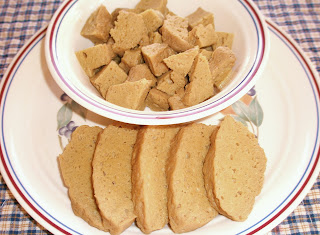 Up until now, I haven't had the best of luck making seitan.  In fact, I haven't been all that happy with the seitan I buy from the store.  But all this has changed, now that I've tried the "Basic Simmered Seitan" (page 305).  In my effort to avoid soy isolates and other highly processed soy foods, I've been trying to use seitan more often as a meat substitute.  I know there are those who wonder, why bother?  But I really do enjoy the texture and versatility offered by faux meats, and if I can find a healthy alternative, so much the better.

As this recipe promised, I ended up with nearly two pounds of seitan after simmering the "dough" for about an hour in the very flavorful broth.  The seitan pieces more than doubled in size during the simmering process, puffing up and absorbing all the wonderful flavors of the simmering broth.  When the cooking time was up, the seitan, much to my delight, turned out oh-so-tender, not at all tough and chewy like some of my past experiments.

I'm so happy I've found the right formula for making my own seitan, as now I will have all kinds of options available for a number of preparations.  As you can see from the picture, I sliced some of the seitan (to be dice up later into strips to add to soup), and I chunked some of it to add to a stew.  I also sliced some for sandwiches, and froze some for later.  This recipe is a really great find! 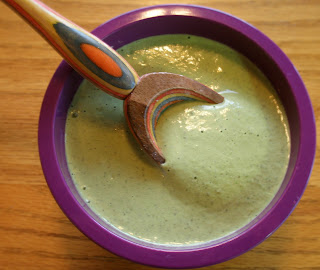 It's been hard for me to find more than a handful of vegan and oil free salad dressings that I really like.  Honestly, if I could accomplish this, I would probably have salad with every meal.  I've tried so many, from homemade to store bought, from the complex to just using a splash of vinegar or salsa.  Nothing has come close to satisfying me like my old fat-filled favorites, although I have found that tofu or nut based dressings come the closest.  So, I decided to try "Oh-My-Goddess Dressing" (page 99) because of the tahini and figured this would be a safe bet.  The dressing calls for ¼ olive oil, 25% of the total dressing (yields 1 cup), not an insignificant part of the recipe.  Leaving it out altogether worried me a little bit, but I decided to just substitute water for the oil, hoping the tahini would add enough fat to make the final outcome creamy and plenty rich. This worked out fine, and I really like the flavor of this dressing.  The herbs and garlic, plus the tanginess from the vinegar and lemon provide a burst of flavor, and the pale green color is typical of green goddess dressings.  All in all, a good everyday salad dressing.
Posted by Becky at 7:12 PM No comments:

Broccoli with Black Beans and Walnuts 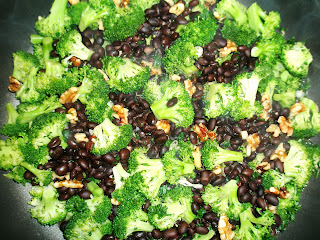 "Broccoli with Black Beans and Walnuts" (page 358) is in the Vegetable Side Dishes chapter, although it is suggested that it is hardy enough to serve as a main dish for two if served over rice or quinoa.  I chose to make this dish the center of our meal, but instead of serving it over a grain, I added a baked potato on the side, and this provided a substantial dinner for two.  The contrast of colors and textures alone make this an interesting and pretty dish.  The broccoli is steamed just long enough to be tender and to retain its bright green color, and then cooked briefly in a large skillet along with the beans, walnuts, garlic, and green onions.  I used broth instead of oil to sauté everything together, and in fact, added a little extra broth to the finished dish to make it a little saucier.  Both my husband and I thought this would benefit with the addition of a sauce, or more seasonings, but this was easily remedied at the table by adding our condiments of choice.  Tasty dish!
Posted by Becky at 9:50 AM No comments: